The ESCU Association presents the third anniversary edition of the large multicultural event called the Embassies Festival, with this year’s theme called ‘ONE World’, organized from September 7 to 10 at Grand Hotel du Boulevard, the place that will host the ethnographic at exhibitions and the inspirational conferences, at Cinema PRO, where artistic movies and recent documentaries from more than 16 countries will be screened, and the Titan Park, the location where World Bazaar & Show will take place, with exotic World Music performances and dances from all over the world, with presentation stands of the participating embassies, workshops, ceremonies and multicultural workshops and tasting of culinary dishes from over 10 traditional cuisines. There will be music and dance performances with influences from countries like India, Indonesia, Angola, Argentina, Brazil, Malaysia, Macedonia, Vietnam, Greece, Cuba, Iran, Peru, South Korea, Pakistan, Armenia, China, South Africa, Romania and others.

The festival has drawn a route for the Romanian public, by which visitors can travel, learn and experience in a dynamic and realistic way different forms of culture, music, conversations, movie screenings, ceremonies and traditions of countries and civilizations which are represented in Romania by embassies, cultural institutes, ethnic minorities and associations, as well as by international organizations.

The most important novelty of the festival will be a joint central exhibition, which will integrate the idea of “The World’s Costumes – The Craft Linking Civilizations”, through the participation of more than 40 exhibiting countries. This exhibition will explore the issues that the Romanian blouse (“ia” – e.n.), the Balkan embroidery and braiding, the fascinating South Korean Hanbok, the colorful Indian Sari, the mysterious thawb tunics and the caftans in the Arabian region, the Mexican huipil, the Greek fustanella and the geometrical drawings on the Angola costumes, have in common. This kaleidoscopic multicultural installation of tones, textures, marks, exotic embroideries and ornaments, built against the background of traditional photographs, paintings and handicrafts, made of ceramics, bronze, wood, mosaic and damasks, was created to express in a nonverbal dialogue the cultural diversity of the world, shaping a metaphorical space combining traditional and modern elements into an original collaborative concept dedicated to the spectacular of the folk clothes.

“We are very glad to announce, together with our friends and partners, that the Embassies Festival comes back for four days, with the third edition, suggesting the most challenging line-up of events and exhibitions until now, joining and combining the magic and the expressiveness of the great cultures of the world, together with the emotion and the authenticity of the Romanian artistic expression. The Embassies Festival is a unique project by its specificity and it has a huge cultural impact, since it interrogates the possibilities of contact between cultures through very different ways of expression. This is why we felt the need to add a few new elements in the program of this year’s festival: an exhibition focused on a single strong identity issue, as well as conferences and debates on themes dedicated to the primordial connections between cultures and countries, everything completed by an artistic program of exciting spectacles, dances, ceremonies and workshops, which will simply invite us to fill at a small scale what is like to really be World Citizens” added Andreea Danescu, organizer of the Embassies Festival. 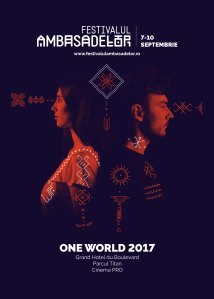 Thus, over the whole week, people from Bucharest will be invited to a number of events, exhibitions and artistic moments, which will turn Bucharest into a cultural mosaic. The event, held under the One World headline, brings together a host of events displaying the cultural richness of 35 countries from 6 continents. The events cover film screenings, exhibitions, world music and dance performances, workshops, and gastronomy events, among others. The festival brings a dynamic atmosphere, where visitors can travel, learn and experiment different forms of culture, music, film screenings and traditions of different countries.